More event information at The Little

WXXI Public Media and the Little Theatre are proud to announce and invite entries for the Rochester Teen Film Festival, a collaborative, juried media competition for youth in the Rochester region.

Purpose: The purpose of the festival is to honor the work of urban, suburban, and rural teen filmmakers and give young people an authentic opportunity to participate in a real film festival.

Awards & Judging: All submissions are judged by a jury and finalists have been selected to have their films shown at the Little Theatre. The young filmmakers selected as part of this year’s festival will also have a chance to earn one of the following four awards, each of which comes with a cash prize:

The Philip Seymour Hoffman Award honors the life and legacy of the late Academy Award-winning actor and Fairport, New York native. The annual award is given to the teen whose film is chosen by the judges as “Best of Fest.” The award was established in association with the Hoffman family with funds raised during The Little Theatre’s Philip Seymour Hoffman Tribute Film Series.

The Jack Garner Award for Best Director is a new annual award in the memory of long-time RTFF jury member and much beloved and spirited national film critic. It is given through the support of Bonnie Garner and the Garner family.

The Marilyn O’Connor Award
is presented to a film that addresses a social issue through the lens of compassion, equity and social justice. Marilyn O’Connor has never crossed a picket line. She’s been fighting for equality and justice as a youth, a parent, a public defender and Family Court Judge. She was recognized for mentoring young women in the practice of law as the recipient of the NYS Women’s Bar Association’s Betty Weinberg Ellerin’s Mentoring Award and was one of the founders of the Greater Rochester Association for Women Attorneys, an organization that supports and encourages women in the legal community.

The Rochester Teen Film Festival and showcase event is made possible with support from:

Preview past films submitted to the Rochester Teen Film Festival: 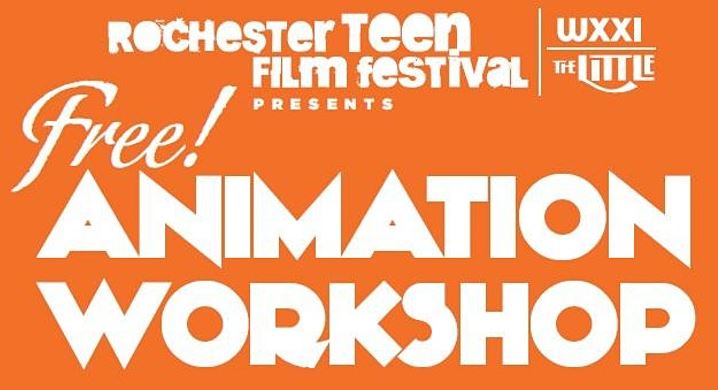 About: Learn about the craft of animation with hands-on demonstrations by some of the best in the industry. Plus, watch short animated films on the big screen of the Little Theatre. Finally, you can then tour Animatus Studio, just down the street. Light refreshments will be served.

The Animation Workshop is made possible with support from: